How to Zero a Scope for Rifle Shooting and Hunting

Rifle scopes are more popular than ever before. Rifle scopes are used by hunters, tactical shooters, people looking for a rapid use home defense optic, and especially tactical rifle enthusiasts looking to find the perfect optic for their AR-15. With optics becoming more and more popular, it’s important to know how to zero a scope.

There are many, many different kinds of scopes out there, but this article is designed as a general guide for zeroing a rifle optic. While this article covers how to zero a scope for most rifle models, some require specific instructions.

Whenever in doubt, refer to your scope’s actual instruction manual. Most scopes will fall into this guide when it comes to zeroing an optic, but there may be small detail changes. This includes particular ranges or particular loads that the rifle scope is supposed to use.

While this isn’t a guide on how to install a scope, it is incredibly important that your scope is installed correctly. If the scope is not correctly installed it can be impossible to zero. Depending on the scope rings or mount setup, the installation may be slightly different for each scope.

For a typical variable magnification scope, the use of a scope ring or a single piece mount is often required. Any mounted scope rail needs to tighten to the receiver, and Loc Tite should be applied.  The scope rings or mount should be mounted and secure to the rifle.

The scope mounting system needs to be tightened down until it doesn’t move, assuming the mount uses traditional screws. Traditional screws will most often require the use of substances like Loc Tite to make sure the scope rings or scope mount does not become loose from recoil when firing.

If the mount or rings utilize a QD mount, it needs to lock tight and fit the scope rail appropriately. The scope should be positioned to ensure that the scope has correct eye relief. Correct eye relief should be listed in the instruction manual. For holographic scopes, the eye relief will not matter as much as it will when installing a scope for a rimfire rifle.

The reticle should be positioned so that the scope stays level. The vertical crosshair should sit perfectly up and down.

Here’s a great video from MidwayUSA that walks you through how to mount a scope properly.

When you zero a scope to a rifle, you are also zeroing it to a specific type of ammunition. This is called a load, and factors that change a load include overall length, bullet weight, velocity, and projectile type. No guide on how to zero a scope is complete without adjusting for ammunition.

Once a scope is zeroed to a certain load of ammunition, this load will be the most precise for that scope. Other loads of the same caliber may cause slight variations in accuracy. These variations are typically small and only make a significant difference at long range, or when measuring groups with precision devices.

For hunters and precision target shooters with variable scopes, you should choose one type of ammo and stick with it while hunting or target shooting. For scopes like red dots, these variations between ammunition will hardly ever create a noticeable variation in accuracy.

Not sure how to zero a scope with different targets? Don’t worry: you can zero a rifle with almost any target. The easiest targets to use are targets that are designed for bullseye shooting and are divided into grids. These grid boxes are most commonly a square inch.

This allows the shooter to easily adjust the scope based on how many inches it sits away from the bullseye. These targets are very common and easy to find in gun stores and sporting goods stores.

When hanging the target, use a larger piece of material behind the target. This material is best often left blank and allows shooters to see if they are hitting off target. Simple pieces of cardboard work well as backing for a target.

Once your target is established, back up to roughly half the distance you plan on shooting the rifle at. At half the standard range, a shooter can easily adjust their rifle on target before moving back to their normal firing range.

From here you’ll set up your shooting position. The most precise and accurate method is using a bench rest and a sled or a gun vise to secure the weapon.

This takes the human element out of zeroing the scope and stabilizes it as close to perfect as possible. Alternatively, a shooter can set up behind a rifle in the prone position, with sandbags or a bipod to aid in stabilizing the rifle.

Regardless of your method of shooting, stabilization is the most important factor in how to zero a scope. To correctly zero a rifle and scope, shooters need a stable platform to shoot from.

Now, let’s get into the meat of how to zero a scope. Once a shooter is in position, they begin the zeroing process. For bolt actions, single shots, and AR-style rifles, the shooter can remove the bolt, separate the action, and look down the barrel. Shooters then adjust the weapon until the barrel is in relative line with the target.

The shooter can gaze through the barrel, then the scope. If the scope is off of the target, the view between the barrel and scope will be significantly different.

Other rifle designs are more difficult to zero. For these rifles, shooters can utilize a laser bore sight. This device fits into the chamber of the weapon and sends a laser directly down the barrel.

A shooter can adjust the scope until the reticle covers the laser on the target. This method can be used with any rifle and is a very effective way to aid in zeroing an optic. This helps shooters reduce the time and ammunition needed to zero an optic.

These devices are quite affordable and easy to both find and use.

Once a shooter has gotten their reticle as close as possible to being on target, it is time to go hot. When zeroing a rifle scope, the best practice is to take the necessary time to do it correctly. Apply the fundamentals to each and every shot taken.

Load and fire three rounds without making adjustments or moving the target or rifle. Once the three shots are fired, you can unload the rifle and ensure the action is opened. Once this is done, move on downrange to the target.

Then, inspect the target. Your three shots are your ‘group’. This group should share some relatively similar characteristics.

These three shots should all be in one general area of a target. For example, the three shots may not be right on top of each other, but are all left and low of the bullseye.

If the three shots are randomly placed both high and low or both left and right, there is an external issue. This issue can be connected to any of the following:

If this is the case, the shooter needs to reevaluate their rifle, ammunition, scope, and skills.

If the group is routine, the shooter should measure and then apply those measurements to their rifle scope turrets. Turrets are different from scope to scope, and turrets feature different adjustment measurements per click.

Turrets adjust the reticle up and down and left to right. This allows you to align the scope to where the rifle shoots. This measurement will correspond to distance moved on the target.

Repeat the process of shooting three rounds and adjusting the scope until it is striking the bullseye of the target. Once this is complete, place a new target on the target holder and shoot three more shots to confirm the zero.

Once the shooter confirms his or her zero, they or the target should move to the range they expect to shoot at. Once at this range, the shooter cleans their bore at least one time. Shooters should ensure the weapon is clear, then run a boresnake or punch rod with brush through the barrel to clean it.

The shooter should then shoot three shots and observe where it strikes on the target. When safe to do so, they should repeat the process of zeroing their rifle by making adjustments and firing. The shooter will then repeat this process until the rifle is zeroed at this range.

At this point, the shooter has completed the steps of how to zero a scope. A shooter can then call it a day, pack it up, and go home. Alternatively, they can move the target or themselves back even further and zero the rifle to ensure it is accurate at ranges beyond what the shooter expects.

This is optional but can be very handy in unplanned situations.

How to Zero a Scope: Final Thoughts

Do you confidently know how to zero a scope? Zeroing a rifle to a scope is an absolute necessity. The more time a shooter takes and applies the fundamentals, the more precise their scope will be. Every step should be done appropriately, from setting the scope on the rifle to securing the rifle into a stable firing position.

Skipping any step, or being lazy about it, will result in frustration at best, or a poorly zeroed rifle at worst. Shooters should take their time, be safe, and always double-check their zeroes.

Vortex Optics has also put together a good video that walks through how to zero a scope from start to finish.

Best Rimfire Rifle Scopes for the .22LR: Leupold, Nikon, and Other Optics Reviews 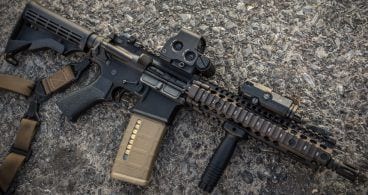 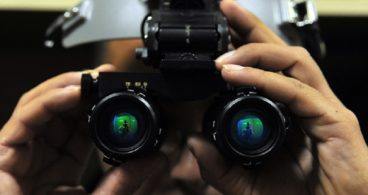 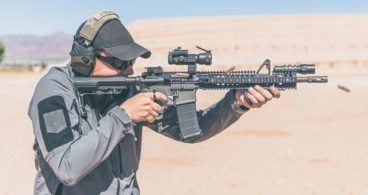 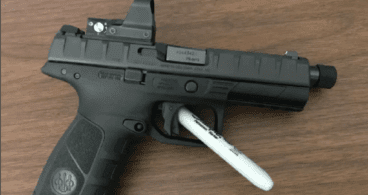