South Carolina Based Palmetto State Armory (PSA), a firearms manufacturer and vendor that has quickly been gaining steam in the market has made a place for itself by offering fantastic prices, good quality, and excellent customer service, all in the USA. Today we’re looking at one of their AR-15 upper receivers, an AR-15 lower receiver, and considering them as a complete rifle.

The AR-15, the civilian variant of the M16, has been America’s choice as the fighting and plinking rifle since its introduction in the mid-1960s. Today, the consumer has a dizzying array of choice in the AR market, so the question often becomes: where should a new shooter begin? To that end, Palmetto State Armory rifles are a great place to start, especially this upper receiver. We’ll walk you through the weapon system, starting with the upper, from back to front so you know exactly what you’re looking at in this rifle. 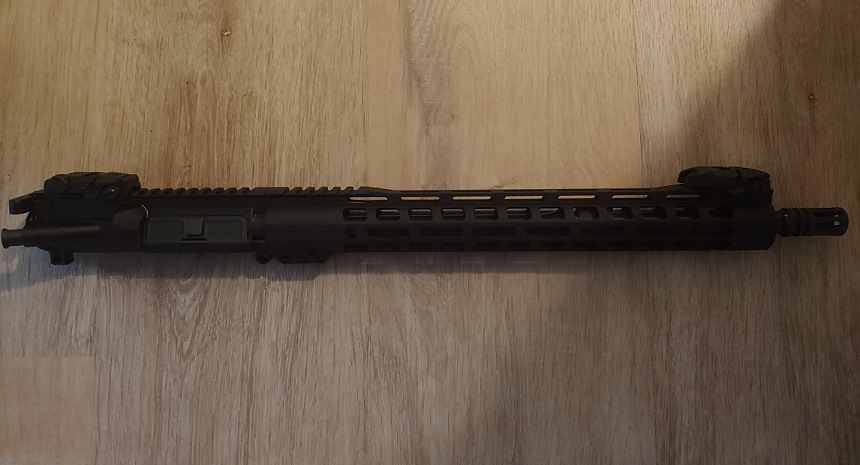 Starting at the business end, the upper sports a standard A2 style flash hider. Here, “standard” should not be taken to mean inferior. This flash hider was carefully designed to cut down on recoil, or what we know as muzzle flash, and has been sported on AR platform rifles, civilian and military, in the millions. The AR-15 barrel is also threaded in the standard 1/2×28 thread pitch. This means that, should you grow out of the A2 flash hider for some reason, almost any other muzzle device meant for the platform will fit and won’t be much trouble for either the local gunsmith or the handy gun owner.

The Barrel itself is 16” in length with the A2 profile. This is, again, an industry standard and tried-and-true design that has been sported on AR systems for nearly half a century. This barrel profile is a fantastic middle ground. It is long enough to meet any legal requirements for a rifle, short enough to still be handy, and just heavy enough to stand up to fairly spirited firing. The barrel is made out of 4150 Chrome-Moly Vanadium and is nitride finished. Again, these materials provide an excellent mix of durability, weight, and value that will give you a barrel that will last years, provided you keep it clean and lubricated.

This barrel length is suitable for mid-length gas systems (more on this later as we get to the lower), and that’s exactly what Palmetto state has included here. This sensible choice of muzzle, barrel, and gas system means that the upper is tuned, out of the box, for 5.56 ammunition and will fire standard 55-grain projectiles with acceptable accuracy, assuming the shooter does their part. This is aided with the 1:7 twist rate in the rifling, which will stabilize a variety of bullet weights well.

Around that barrel is Palmetto State Amory’s own AR-15 lightweight M-Lock rail handguard. On its own, this saves some weight, has a pleasant feel in the hand, and vents heat fantastically well. It also has a ton of M-Lock slots all around, allowing you to upgrade with any array or number of optics, front groups, lasers, sling mounts, or anything else that local laws, your budget, or your biceps will allow. There’s also lots of rail space on the top, letting you decide if, and where, to place any scopes.

Moving back into the receiver itself, you’ll find this one home to a full-auto bolt carrier. This won’t make a ton of difference to most people, but if you’re one of the lucky folks with access to a full-auto lower, then you can attach this upper and be off to the range! Racking that bolt back is a standard, and included military-spec charging handle. That makes this rifle a great platform to learn the standard AR-15 manual of arms: if you want, you can spend the money later and upgrade to a high-speed, low-drag charging handle, but the standard one, again, is a rock-solid and reliable choice.

The top of the receiver is fully covered in Picatinny rail: your options for eye relief and accessory placement are totally up to you, and that’s a wonderful thing.  Atop of this rail, Palmetto State Armory has included Magpul MBUS sights. While intended as backups to other optics (more on that later, as well), these flip-up sights are more than capable on their own, and recreate standard AR sights with a fraction of the weight, and can be tucked out of the way if you do end up placing a secondary optic on the rifle.

Upgrades to the AR-15 Upper

The receiver has a few really handy updates that make it stand out in this budget class. First, it has a brass deflector. Early (or retro!) AR models had nothing stopping hot brass from hitting the shooter in the face. This upper has a handy deflector that will send standard loaded casings about two meters to your right. Similarly, there is a forward assist. Should you encounter a malfunction in which the bolt is nearly, but not all the way, in battery, you can assist the bolt forward with a gentle push of the thumb, or a furious smack of your palm. Your choice. To keep such malfunctions, and others, to a minimum, Palmetto State Armory has also included a spring-loaded dust cover, so that you can keep the rifle clean in storage or walking in the field. This was a vital update that made the M16 so popular in Vietnam, and we can still appreciate it today. Overall, PSA has put together a capable upper that will make a solid all-around companion to any lower you may already have. 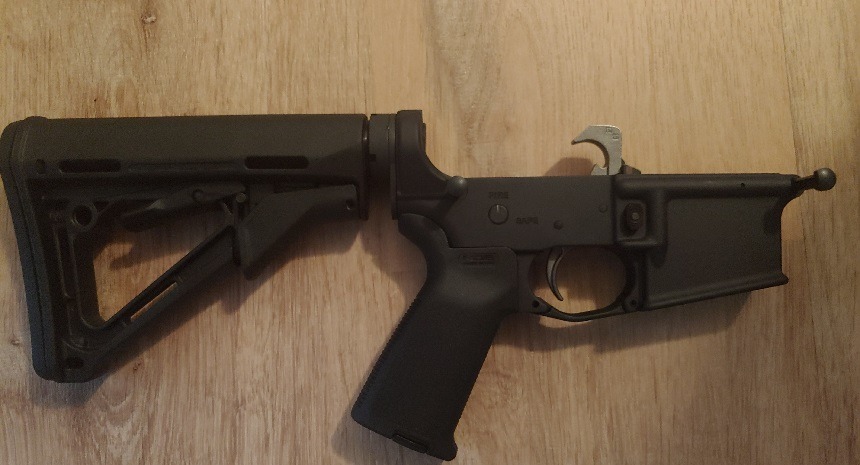 Short one lower? Palmetto State Armory has you covered here as well!

The standard PSA AR-15 that we’re looking at here starts as a standard AR lower: the magazine well, overall profile, safety, and magazine release are all standard to military specifications (without the full-auto selector), making this a sensible place to begin for any AR build.

The receiver has a carbine buffer and buffer tube. This is important to our commentary on the complete rifle in just a moment.

Upgrades to the AR-15 Lower

Much like the upper we have reviewed, Palmetto State Armory has made some sensible upgrades to this lower that makes it really stand out in its budget category.  First, PSA has its own, upgraded and polished trigger group built into the receiver. This is a nice upgrade over military triggers, which are known for having more than a little bit of slop, especially in the reset. A good trigger is a great tool for the beginner AR owner in particular, but anyone can appreciate PSA’s efforts here.

Some of the most important parts of a lower are the furniture attached to it. In this case, Palmetto State Armory has gone full Magpul. First, the rifle has a Magpul pistol grip. This has two major features that most people will like. First, it has a small compartment at the bottom. This can be used to store a small bottle of weapon lubricant, a battery for an optic (if you have one), or anything else you can think of that’s about the size of a AA battery. Second, the grip has texturing that lacks a finger groove. The finger groove of most grips is a common complaint among AR enthusiasts, so Magpul dropped it and instead added stippling that makes the grip easier to hold even in adverse conditions.

Another major upgrade is the stock. PSA has included Magpul’s CTR stock on this lower. The CTR stock, meant for carbine-length buffer tubes, is adjustable, locks securely into place with a handy lever, and has a sloped cheek-weld for optimum ocular alignment with any sights. Also, the stock has very little wobble. Of course, you’ll want to carry around the rifle at some point. Thinking ahead, Magpul has added plenty of provisions for quick detach (QD) and standard GI sling mounting options. Overall, Palmetto State Armory has outdone themselves on this one, adding some serious quality of life upgrades to the lower that makes it a good choice for anyone with an upper to attach on it. 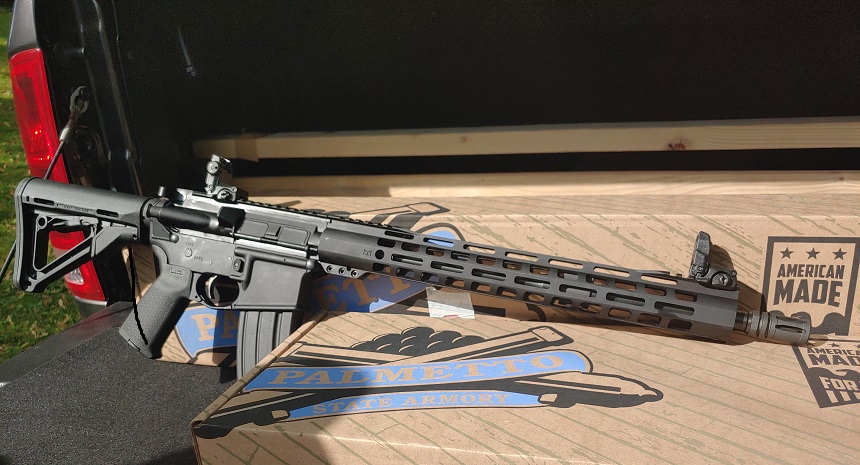 Now, let’s consider this as a complete rifle.

As previously mentioned, the upper has a mid-length gas system. In AR platform rifle, part of the reliability of the system depends on the tuning of the rifle. This means that the gas system, buffer, and bullets all have to make sense together to keep the gun running. In this case, PSA has done the homework for us. A mid-length gas system, firing 5.56mm bullets, is best matched to a carbine-length buffer and tube, which is what you would have if this rifle were built as a complete firearm. Thus, the gun should, at least in theory, run as it comes from Palmetto State Armory.

In terms of aesthetics, the complete gun is an attractive package. Because PSA made the handguard, lower, and upper, all of them have matching finishes. This gives the gun that sleek, black rifle look that many go for when shopping for an AR-15 rifle.

Feature-wise, this would be a well-appointed rifle. The MBUS sights should keep you on target and the Magpul furniture makes the rifle ergonomic. As it stands, the rifle is set up for the field and would take a single point sling with ease.

This rifle is also a great platform for add-ons. With the surplus of Mlock and rail space, a sensible upgrade, for a QD sling mount in the front, would give you more sling options. Similarly, Magpul and many others make a variety of grips that would work with the handguard. Also, thanks to the rail space on the top of the receiver, any Picatinny-ready optic will lock securely onto the rifle giving you the capabilities you want. The same can be said for bipods, lasers, lights, or anything else you may want to attach on a rifle.

Palmetto State Armory makes a formidable offering in this upper, lower, or combination thereof. At this price point, it would be hard, if not impossible to beat. As it comes from PSA, this rifle would be a fantastic first AR or a great addition for a gun collection giving you a capable rifle for the range, training, home defense or hunting.  The basic platform itself is sensible, and the upgrades PSA did spring for will make your shooting experience better without breaking the bank.  For your money, you would end up with a rifle that is something of a jack of all trades, with some really nice features. It’s also worth noting that Palmetto State Armory has a growing reputation for fantastic customer support and great build quality. This is a combination that is well worth your time to check out! 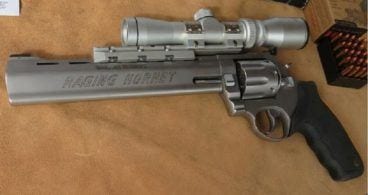 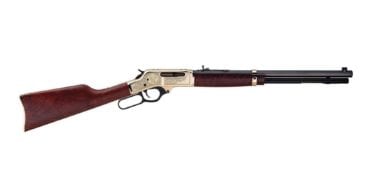 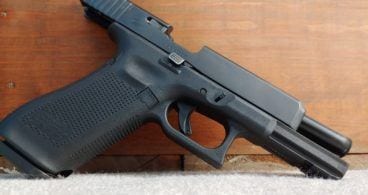 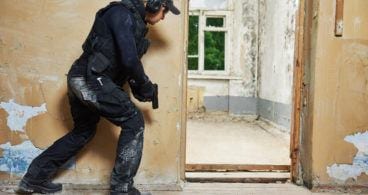